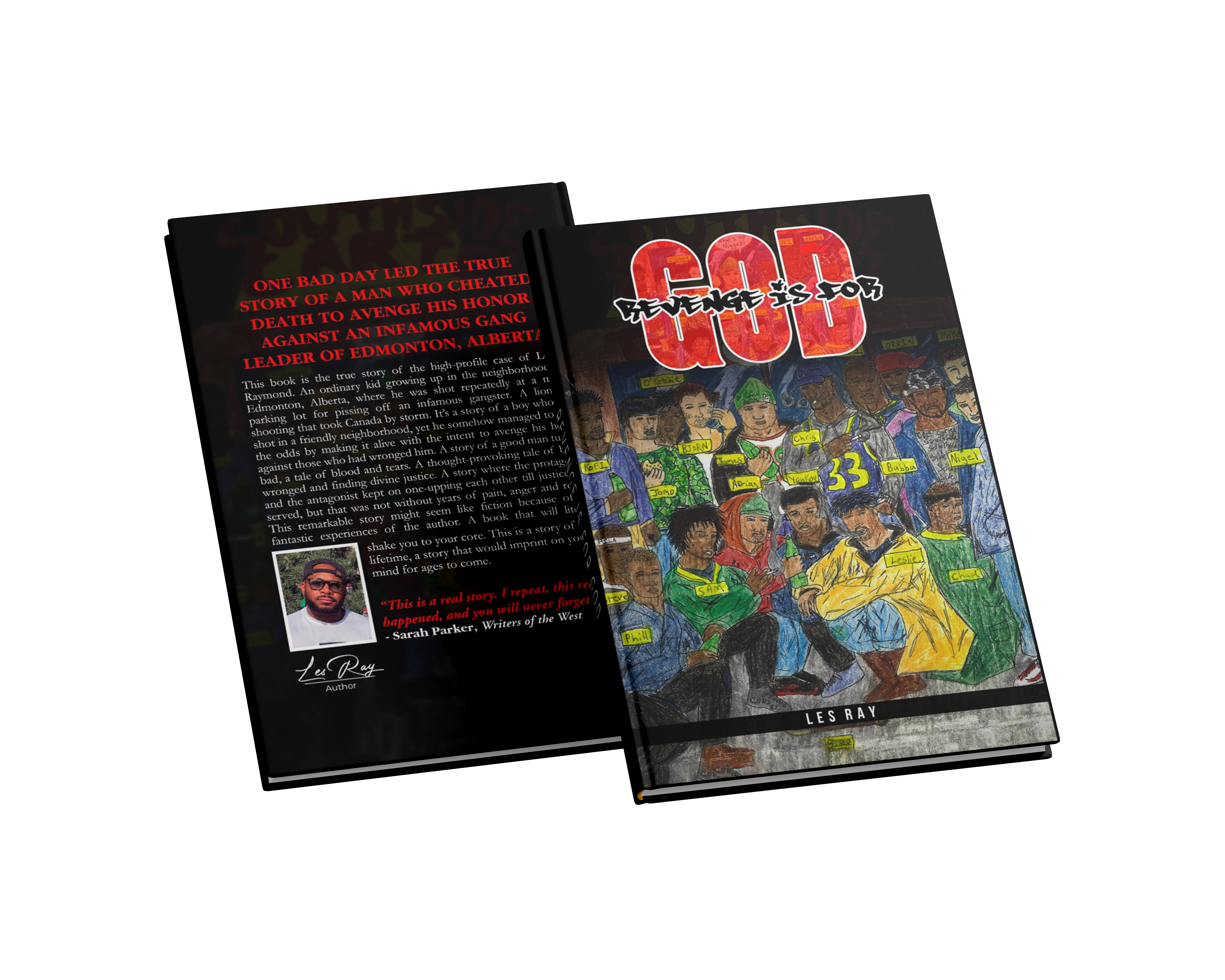 Revenge is for God by Les Ray
This book is based on a true story that follows the case of a dauntless young man who stood in front of the barrel of injustice.

Within the belly of Edmonton, Alberta, festered crime. Gangs, drugs, gunfire and organized crime ran rampant under the nose of justice. It had swept, under its corrupting arm countless innocents, changing many to either evil or to fight it. Crime had set the fate’s loom into motion, weaving a threat that would attempt to cut the root of the abysmal weed. In the shape of a young man named Leslie with a strong sense of justice and truth, he stood against the conspiring forces of organized crime lords for they had wronged him.

A tale told in the perspective of a respectable young teen and how his life is influenced by his environment hence forced to adapt to a danger much bigger than what he had imagined. It is an ode to the high-profile case of Les Raymond, a mere student standing against the city’s notorious crime lords. It was said that he was gunned down in a mall’s parking lot for his insubordination, the lionized firefight shook Canada’s peace to its core. Nobody had expected a young man to stand tall in such a controversy and survive to tell the tale therein, leaving behind a tale of blood, tears and secrets.

According to Les Ray, he underlines the importance of humane desires, ideologies and beliefs which we seen within the unbreakable spirit of Les who stood up for what he thought was true despite the dangers. Though his family is tied to much humbler beginnings, it doesn’t stop Les from adapting to the true face of the world. An innocent boy who was turned into a vigilante when the world bore its talons in his way and instead of running away, he addressed the problem at face value. Therein, universal laws of belief, adaption, survival and, evolution applied to Les and the environment he creates. These intangible desires create the foundation of a man; think of it as a spiritual and emotional replica of the Vitruvian man. The foundation of a human is more than their skeleton or the nervous system but, what separates us from machine is the mystery of our mind and its inner workings. It is hard for us to comprehend what we can’t see.

Written within Revenge is for God, Les Ray recounts the tale of the criminal ecosystem of Edmonton and the eye it casts upon a boy who dared to stand against it. We have some sort of insight when it comes to crime, from jaywalking to pointing a firearm at an innocent, we have been immune to it all but what if the story is told from the perspective of young man who has been otherwise innocent of all crime?

What could have been his motivations that lead him to pick up a gun to fight for his own truths and right. The first impression of this book may leave the reader thinking that they are reading a fictional tale because of the experiences that the author has faced. Not many can say that they had clashed horns with a crime syndicate of course.

For more information or talking to an expert, visit – www.lesraystudios.com