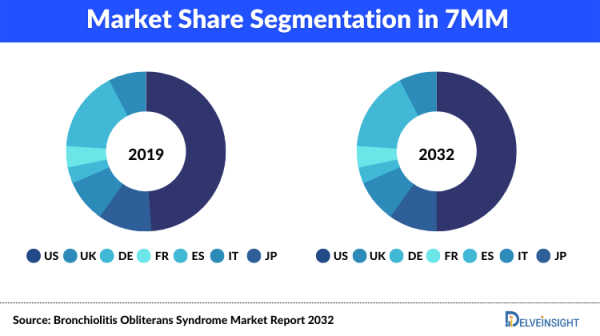 Some facts of Bronchiolitis Obliterans Syndrome Market are:

Some of Bronchiolitis Obliterans Syndrome Companies are:

Bronchiolitis obliterans syndrome (BOS) is a form of chronic lung allograft dysfunction that affects a majority of lung transplant recipients and is the primary factor limiting long-term transplant survival. It is characterized by progressive airflow obstruction resulting in acute rejection of the graft, followed by infections, or other coexistent condition.

It is an uncommon respiratory disease characterized by fixed airway obstruction, where the bronchioles in the lung become narrowed or blocked by fibrous tissue. The disease is disabling and can be potentially severe. It may be caused occupationally by accidental, acute, high concentration exposure to industrial gases, such as nitrogen dioxide etc.

Bronchiolitis obliterans can also be associated with rheumatoid arthritis and graft-versus-host disease following a lung or hematopoietic cell transplantation. Exposure to certain food flavoring agents, notably the buttery food flavoring agent diacetyl, with the development of bronchiolitis obliterans. Several other risk factors can also lead to the development of BOS such as exposure to inhaled toxins and gases, including sulfur mustard gas, nitrogen oxides, diacetyl, fly ash, and fiberglass. It is also known to occur after a respiratory viral infection (adenovirus, respiratory syncytial virus), especially in case of children.

Some of Bronchiolitis Obliterans Syndrome Drugs are:

DelveInsight is a leading Business Consultant and Market Research firm focused exclusively on life sciences. It supports Pharma companies by providing end-to-end comprehensive solutions to improve their performance.  Get hassle-free access to all the healthcare and pharma market research reports through our subscription-based platform PharmDelve.