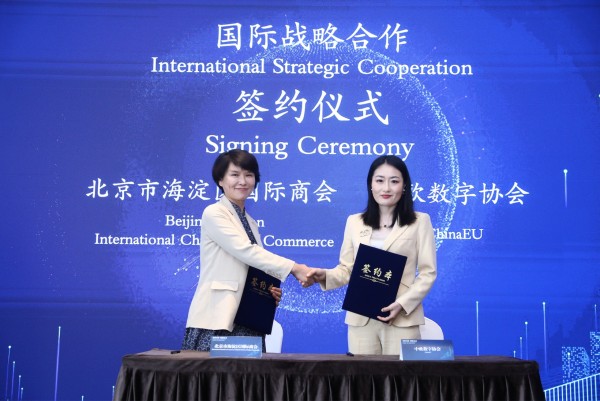 Themed with Global Connection for a Brighter Future, the 2022 Online Promotion Meeting for the Construction of “Two Zones” in Haidian Beijing has been held successfully on July 13th, 2022 in Beijing, which was hosted by the Haidian District People’s Government of Beijing Municipality and organized by Haidian District Commerce Bureau of Beijing Municipality and Beijing Haidian International Chamber of Commerce with the assistance of ChinaEU. With hybrid format, this conference attracts many Chinese and European entrepreneurs and scholars from different fields to discuss some heated topics, such as the latest, significant development strategies of “Two Zones” construction in Haidian District, critical industries for international investment promotion in 2022, as well as in-depth industry cooperation between China and Europe in high technology. 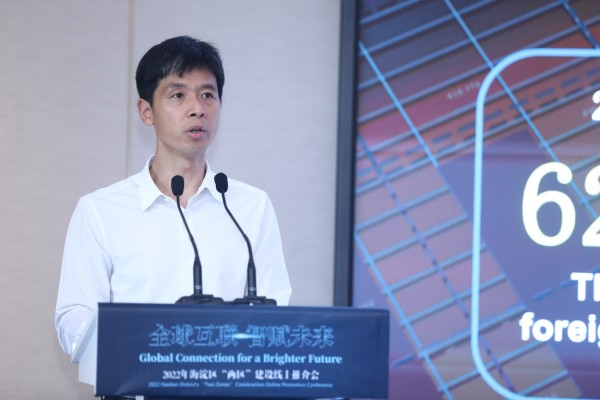 Lin Jianhua, Member of the Standing Committee and Deputy Mayor of Beijing Haidian District, attends the conference and delivers a speech.

He says that thanks to years of scientific innovation, Haidian District has become a core and strong driver of Beijing’s high-quality economic development, with continuous industry transformation and upgrading, emerging industries and business patterns, reinforced structures of high-tech industries and expanded consumer market. He emphasizes that during the half and a year of “Two Zones” construction, the District government has made bold attempts based on local conditions, international standards and global visions, achieving fruitful outcomes. He hopes that this conference can become a platform for the Haidian District to share its accomplishments of “Two Zones” construction to the world, to exhibit its high-quality business environment and first-rate supply service, and to strengthen its information exchanges and cooperation with the rest of the world, thus bringing in new impetus for the new-stage construction of “Two Zones.”

Dr. Liu Chang, the chair of the Government Affairs Forum of the European Union Chamber of Commerce in China, makes her speech on behalf of the delegates of European enterprises and institutions at the conference. 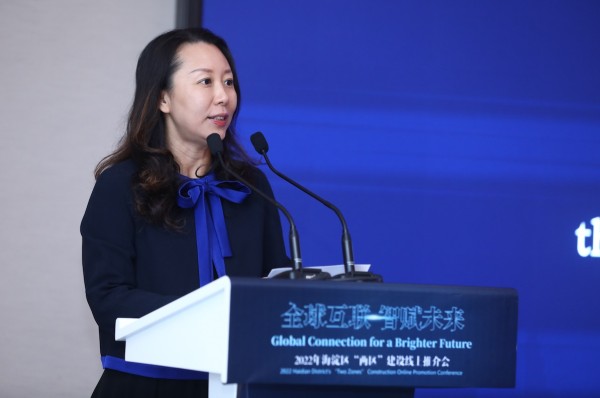 She says that the European Union Chamber of Commerce in China, after over 20-plus years of development, has grown into an important driving force for promoting the economic and trade cooperation between China and Europe. Keeping abreast with the formulation and implementation of China’s innovative development policies, the chamber has offered its advice and suggestions and established high-quality cooperation platforms for Chinese and European companies for excellent services. She hopes that this conference can help more European enterprises gain a comprehensive understanding of the achievements and measures of construction of “Two Zone” in Haidian District and support the District in attracting more outstanding enterprises.

Luigi Gambardella, the president of this conference’s international strategic partner ChinaEU, expresses his prospect that all sides could make concerted efforts in the post-epidemic era to promptly establish an institutional dialogue and cooperation platform between Haidian District and the high-tech companies from China and Europe and to advance the cooperation between European technology and trading businesses and the District in resources and industrial complementarities. 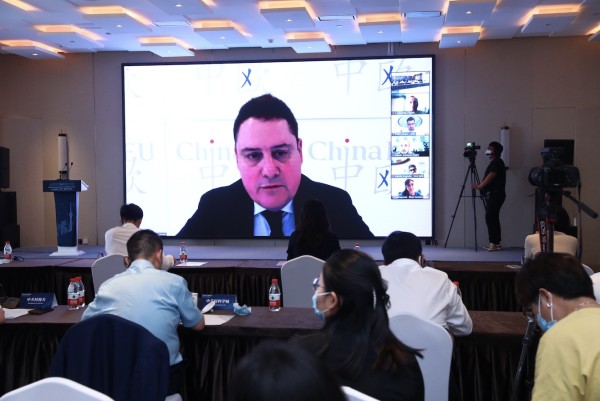 At the conference, Deputy Mayor Lin Jianhua presents a detailed introduction to the latest status of the District’s “Two Zones” construction and business environment. SGS and Novozymes give their keynote speeches on their achievements and business development experience in Haidian District in recent years.

Wang Ying, the vice-chairman of ChinaEU and executive chairman of the Global New Economic Alliance, lifts the curtain on the exchange session of the conference, with more than ten European high-tech companies and commerce institutions attending online. They have deep conversations about the strategic planning of Haidian District’s “Two Zones” construction, China and Europe’s digital economy, the cooperation of the two sides’ high-tech companies in technology R&D, the realization of business scenarios, and the implementation of the policies on the operation of high-tech enterprises in the “Two Zones.” Focusing on the Chinese and European digital economy, as well as the entrepreneurship, development and cooperation of information high-tech companies, ChinaEU endeavors to foster the cooperation between Chinese and European enterprises in digital trading, technology research and the commercialization of achievements in scientific research. The delegates of European enterprises and institutions share their profound thinking on economic and trade cooperation between China and Europe and industrial development, and communicate with the representatives of the District government on some problems of enterprise development in the District.

Three European guest speakers, including Mark Hedley, the director of Knowledge Economy/Tech Sector China-Britain Business Council, Denis Depoux, the co-president of Roland Berger Global Management Board, and Bernardo Mendia, the secretary-general of Portugal-China Chamber of Commerce and Industry, deliver their keynote speeches on innovative development of digital economy, advantages of Haidian District’s economic location, industrial integration and innovation, and exchanges between China and Europe in commerce and trading.

Via online video, delegates from over ten European companies and institutions, such as the Spanish Chamber of Commerce in China, Netcomm, APEC E-Commerce Business Alliance, Supercom and Advisorio, have in-depth exchanges on the development in Haidian District with the officials from five functional departments of the District government, including business, finance and investment promotion. 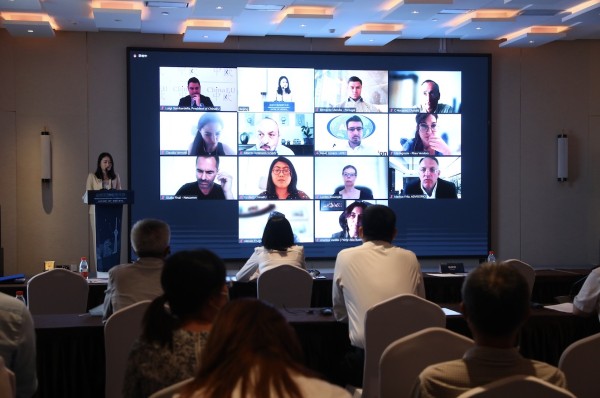 Lin Jianhua, Member of the Standing Committee and Deputy Mayor of Beijing Haidian District, shares the accomplishments of the District’s service industry since its further opening up and of the “Two Zones” construction over the past year. Besides, he also tells the guests more about the District’s improved business environment and the innovative development of Zhongguancun Science City.

Revolving around the strategy of building a new, best-quality city via high-quality development driven by the new impetus caused by the integration of culture and scientific technology, Haidian District has focused on Zhongguancun Science City, and promoted the development of the international information industry and digital trading port, as well as “Two Zones” construction for further reform and opening up. According to Mr. Lin Jianhua’s introduction, the gross regional domestic product of the District in 2021 reached RMB 950.17 billion (USD 148.929 billion), registering a year-on-year growth of 8.8% and 0.3% higher than that of Beijing city. Its economy occupies 23.6% of that of Beijing city, ranking first among all the districts in Beijing. Zhongguancun Science City has a digital economy as its core industry, with the added value of this industry occupying over 50% of the gross regional domestic product of the Haidian District. Apart from that, it is home to many companies in the digital economy, including six leading 100-billion-level enterprises, like as ByteDance, Xiaomi and Baidu, 180 listed companies, and 50 unicorn companies which take up approximately one-fifth of that of China. Zhongguancun Science City is a leader in the innovation of the digital economy both nationwide and worldwide.

According to statistics, the “Two Zones” construction had all its 84 major programs accomplished in 2021, such as the implementation of supportive policies on the program for returned talents after studying abroad (updated version) and favorable policies on technology transfer income tax, as well as the establishment of the system of coordinated protection of intellectual property and offshore innovation center. Until now 157 major programs have been signed collectively in 14 batches. 146 Fortune 500 firms have been chosen as cooperation partners, around 100 of which have been connected. Since the “Two Zones” construction, Haidian District has had 2120 newly-registered companies, including 2039 domestic ones and 81 foreign-funded ones, in the area designated for scientific innovation of its free trade zone. Enjoying over 20,000 enterprises, Haidian District has been growing into a new hub for talents and a magnet for foreign investment.