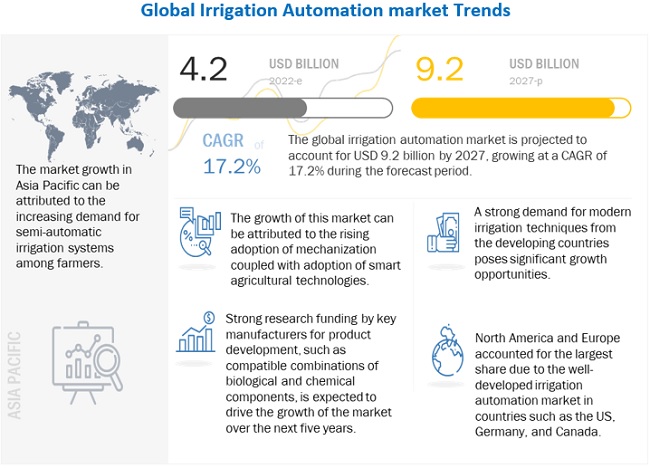 MarketsandMarkets™
The global irrigation automation market size is projected to grow from USD 4.2 billion in 2022 to USD 9.2 billion by 2027, recording a compound annual growth rate (CAGR) of 17.2% during the forecast period.

The report “Irrigation Automation Market by System (Automatic, Semi-automatic), Component (Controllers, Valves, Sprinklers, Sensors, Other components), Irrigation Type (Sprinkler, Drip, Surface), Automation Type, End-Use and Region – Global Forecast to 2027″, is estimated at USD 4.2 billion in 2022; it is projected to grow at a CAGR of 17.2% to reach USD 9.2 billion by 2027.

The Asia Pacific region accounted for the fastest growing region, during the forecast period, in terms of volume and value, respectively. Asia Pacific comprises of one of the largest developing countries with vast irrigated agricultural lands as compared to other regions. On average, the per capita income of the region depends on the agricultural activities conducted in the countries. The key countries that play an important role in the agriculture sector in this region are Australia, India, China, and Japan. Drip irrigation is the largest and predominant in the irrigation type segment in Asia Pacific.

North America dominates the market contributing to 38% in the global irrigation automation market. The region has countries which are a key exporter of agricultural products. North America is mainly dominated by large-scale operations, primarily focused on exports. The region has an advantage of having a very organized distribution chain. Major contributing factors such as fertile soil, availability of water and land, entrepreneurial farmers, and efficient infrastructure are the key competitive advantages that the North American market has.

Automatic segment by system is projected to have the highest growth rate in the irrigation automation market.

Automatic systems provide fully automatic control and flexibility to adjust the system controls periodically. The automatic systems have a central controller which allows the user to adjust when, where, and how much water is applied to the crops. Such systems are much more consistent than its counterpart semi-automatic system or manual system. The sprinkler or valves run times are controllable and can be easily adjusted as necessary. The automatic systems can also perform auxiliary functions such as stopping water supply in case of rain, injecting acid to control pH, sounding alarms, and many others.

By component, the sensors is projected to grow with the highest growth rate in the irrigation automation market.

Sensors are generally attached to the controllers; these sensors fetch real-time data to schedule-controlled irrigation. Most of the sensors are compatible with the existing systems easy to install and produce similar results to smart irrigation controllers. These sensors used in irrigation are broadly classified in three types, namely, soil moisture, rain & freeze, and wind sensors.

The real-time feedback system by automation type is projected to grow with the highest growth rate in the irrigation automation market over the forecast period.

Real-time feedback system involves making decisions based on the real-time live demand from plants which is obtained from sensors. The system uses sensors such as tensiometers, humidity sensors, rain sensors, and temperature sensors. These sensors provide the user with important feedback which allows the user to control the operations with ease. This sensor-based irrigation network sends signals and data from the fields to the irrigation management software, which then decides the irrigation schedule for the crops.

The drip irrigation segment by irrigation type is projected to grow with the highest CAGR of the irrigation automation market over the forecast period.

Drip irrigation also known as micro-irrigation provides root-to-root irrigation and the highest level of water conservation. Drip irrigation often involves devices such as sensors, controllers, and valves, connected to a smartphone or desktop via a web-based system which gives the user, farmer better flexibility to monitor control, automate, and analyze the irrigation system.

The non-agricultural segment by end-use is projected to grow with the highest CAGR of the irrigation automation market over the forecast period.

Non-agricultural uses of irrigation automation include application in sports grounds, residential, pastures, turfs & landscapes, golf courses, and gardens. Measuring the soil moisture content, maintaining right amount of water in the soil is important in these areas, because it helps minimize wastage of water and other resources. However, instead of fixed timers, these automated systems draw data from sensors, weather forecasts, and plant-care databases to determine watering needs and deliver just enough moisture to the soil at the appropriate time.

Our 850 fulltime analyst and SMEs at MarketsandMarkets™ are tracking global high growth markets following the “Growth Engagement Model – GEM”. The GEM aims at proactive collaboration with the clients to identify new opportunities, identify most important customers, write “Attack, avoid and defend” strategies, identify sources of incremental revenues for both the company and its competitors. MarketsandMarkets™ now coming up with 1,500 MicroQuadrants (Positioning top players across leaders, emerging companies, innovators, strategic players) annually in high growth emerging segments. MarketsandMarkets™ is determined to benefit more than 10,000 companies this year for their revenue planning and help them take their innovations/disruptions early to the market by providing them research ahead of the curve.

MarketsandMarkets’s flagship competitive intelligence and market research platform, “Knowledgestore” connects over 200,000 markets and entire value chains for deeper understanding of the unmet insights along with market sizing and forecasts of niche markets.