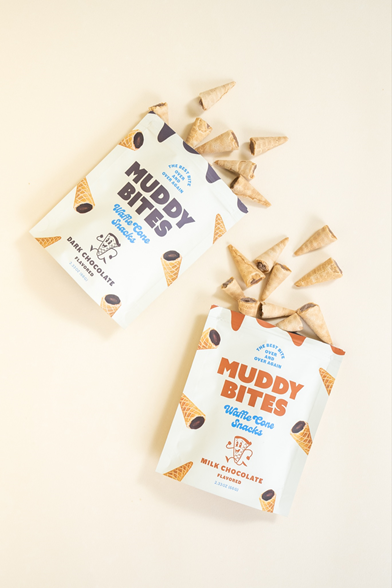 Muddy Bites, Inc. (Muddy Bites), the makers of Muddy Bites Waffle Cone Snacks, today announces the completion of an agreement to place their products in thousands of 7-Eleven stores nationwide. This expansion adds more than 10 times the number of stores currently offering their products. Muddy Bites has until now been limited to around 500 or so retail locations, with most of their orders coming online through their online store or on Amazon. This successful agreement with 7-Eleven was reached despite the premium placed on retail shelf space, especially in the convenience store market. The chain will be carrying all of Muddy Bites’ current flavors, including Milk Chocolate, Dark Chocolate, and White Chocolate. The product will start arriving on store shelves by the beginning of March 2022.

The 7-Eleven agreement is the first step in a planned expansion into over 15,000 retail locations. Muddy Bites is currently negotiating with several major national retailers, with the hopes of a rapid but well-thought-out year of growth. In addition, the company is excited to announce they are also hitting the skies! Starting in April, they will be available on United Airlines flights across the country. Muddy Bites will also be adding to their list of flavors, with choices like Cookies N Cream and much more!

Muddy Bites Co-Founder Jarod Steffes can’t contain his excitement about the company’s growth, “Since day 1, we’ve wanted to be a nationwide product. But obviously, it’s not that simple so we launched online, provided a proof of concept, perfected our recipe, and over 100,000 orders later we know we have something really special here. We can’t wait to be in every local store nationwide over the next couple of years.”

The Muddy Bites’ founders grew up eating hundreds, if not thousands of sundae cones throughout their childhood from anywhere they could get their hands on them. There was always a sense of excitement every time they got down to the chocolate-filled end of the sundae cone. By far, this was their favorite part of the sundae cone. They realized they weren’t the only ones who felt the same way, and just like that, Muddy Bites was born.

Building Muddy Bites has been a WILD journey.

Muddy Bites started in 2018 when they had an idea to make our favorite part of a sundae cone as a bite-sized snack. Being 22-year-olds at the time, the founders set to Kickstarter to crowdfund their first production run. However, it did not go as originally planned. In fact, they failed the 30-day campaign and the idea had to wait longer. After creating a new strategy, they returned to Kickstarter, because they weren’t giving up This time, they set a new, attainable goal of $10,000. To their surprise, the campaign was funded within 72 hours. With that goal met, they were now able to make their dream of bite-sized waffle cone snacks a reality. After several months of learning how to make and fill these bite-sized cones, they finally sent the Kickstarter backers their orders. That’s when they knew they had something special.

Shortly after, Muddy Bites launched its full online store in November of 2019. After a few months of steady orders, Covid hit and changed the world. Luckily, because of their AMAZING customers, they managed to pull through and grow even stronger. They hired a couple of full-time social media and customer support folks to help us realize their dream of making Muddy Bites a globally known snack, and they aren’t slowing down.

In fact, they are now starting to roll back into retail locations, unveiling new merchandise, and adding new flavors to our tasty product line. By the end of 2021 we will have 3 key flavors to choose from: our classic Milk Chocolate, Dark Chocolate and the newest flavor, White Chocolate, with many more flavors to come over the next year.

When you place an order through the online store, tell a friend or family member about them, share on social media, or even read their email newsletters; it truly means the world to them. They have SO MUCH to do, and some very big, ambitious goals. Muddy Bites can’t thank you enough for the support thus far and the team can’t wait to see what the future holds!